Posted on Mar 12 by Tinko 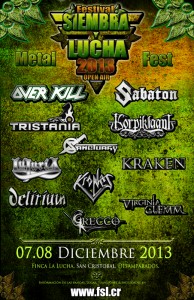 Tristania has today been confirmed to participate on the biggest metal festival in Central America, Costa Rica’s Festival Siembra y Lucha in December 2013.

The festival appearance on December 7th or 8th, 2013 will mark Tristania’s very first visit to Costa Rica, and the band has already expressed their delight with participating on the event:

“There has been quite a lot of interest from festivals and concert promoters in South- and Central America, and we’re really happy this went through. We’ve toured with Overkill before, and it’s going to be great to meet up with both old and new friends in December”, bass player Ole Vistnes says.

Other confirmed acts include Overkill (USA), Sabaton (SWE), Korpiklaani (FIN) and Sanctuary (USA). A few more international acts will be confirmed at a later stage.

Some links and a teaser video for this year’s festival:

Share and Enjoy:
This entry was posted in News. Bookmark the permalink.

One Response to Tristania to Costa Rica